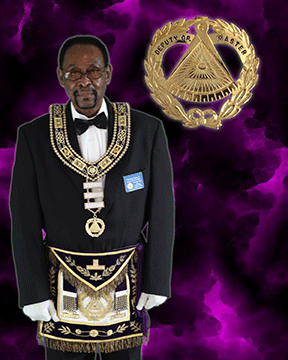 Born and raised in Augusta, Georgia, and graduating from the historical Lucy Craft Laney High School in 1961, at a very young age, I immediately join the United States Air Force serving proudly for 28 years.

While on active duty with the United States Air Force and assigned to Utapao Air Base Thailand, I gained a favorable impression of the Masonic Fraternity. I began to seek admission through one individual that I knew from Vietnam, and that was in the person of Tom Bradley. He immediately gave me an application. February 28, 1976, I was Initiated, March 27, 1976, I was passed April 24, 1976, I became a Master Mason in Siam Military Lodge #30 Bangkok, Thailand under the protection of the Delaware Jurisdiction PHA. Immediately afterward, I was reassigned to Hurlburt Field 9, Mary Esther, Florida, where my Masonic Career began with a sense of urgency. Under the tutelage of J. R. L. Conyers, who was serving as Grand Worthy Patron, District Deputy Grand Master, High Priest of Maxwell Chapter # 115 and the Worshipful Master of Crestview Lodge # 364 now known as J. R. L. Conyers Lodge # 364. I gained a favorable impression of the lodge, its membership, but most of all, its leadership. I immediately demitted into the Most Worshipful Union Grand Lodge and its Jurisdiction in June of 1976. Realizing that this will become my permanent home, I join Beulah First Baptist Church of Fort Walton Beach, Florida.

At the very next election held in December 1976, I was appointed to the position of Junior Deacon and from there to the position of Senior Deacon and then elected to the Junior and Senior Wardens position. In December of 1982, I was elected as Worshipful Master of J. R. L. Conyers Lodge # 364 and served in that position until 1986. Still, on active duty in the Air Force, I was reassigned to Lajes (Azores) Air Base Portugal for 15 months; however, I stayed faithful to and maintain my membership in my home lodge and the Most Worshipful Union Grand Lodge. I was assigned to Eglin AFB, Fort Walton Beach, Florida, in 1988, where I began my Masonic work with a sense of urgency. I was elected once again to the position of Worshipful Master of J. R. L. Conyers Lodge # 364 in 1991 and served in that position until 1996. Following the leads of the many great Masons in this Jurisdiction, it afforded me the privilege of serving in many other posts that give me great pride. Served as High Priest 1997 - 2000 for Maxwell Chapter # 115, Thrice Illustrious Master of C. P. Randolph Council # 9 Royal & Select Masters 2002- 2006 and as the first Eminent Commander of Frank Carter Commandery # 103, 2000 -2001. I also had the privilege to serve as Assistant Rabban of Islam Temple # 182, 1st and 2nd Lt, twice for West Florida Consistory # 252, became an Honorary 33rd Degree Mason October 1991 and a member of the Knight York Cross of Honor. I served as Worthy Patron of V. K. Conyers Chapter # 7, Worthy Joshua of E. L. Seawright Court #90. Served as President of the Conyers/Randolph Study Club, Became Assistant District Deputy Grand Master under PGM George Washington, became District Deputy Grand Master under PGM Dr. Henry Simmons. I became the Chairman of the Committee on Foreign Correspondence under the leadership of PGM Bishop, Dr. Michael R. Moore. It was a privilege, and it gave me great pride to have served in these positions. However, the highest honor that I have received in my Masonic career is when the majority of this Jurisdiction showed confidence in me by electing me to the position of Right Worshipful Junior Grand Warden and now Right Worshipful Senior Grand Warden. The membership of the Most Worshipful Union Grand Lodge continues to show faith and confidence in me, as they have honored me by electing me as their Deputy Grand Master at the 150th Grand Session on August 1, 2020. A date that I will always remember.

I was blessed and honored once again as the United Supreme Council of the Sovereign Grand Inspector General of the 33rd and Last Degree of the Ancient and Accepted Scottish Rite of Freemasonry, Prince Hall Affiliation for the Southern Jurisdiction of the United States of America, (Memphis, Tennessee), found favor in me an Elevated me to the Degree of Sovereign Grand Inspector General Emeritus October 10, 2016. Thanks, Deputy of the Orient of Florida, Dr. Anthony T. Stafford.

I have received other honors, but none will ever compare with those I have listed above.

Brethren, I will continue to earn your trust, and I promise to support the 19th MWUGL and perform my duties to the best of my abilities.