Introducing the Most Worshipful Grand Master 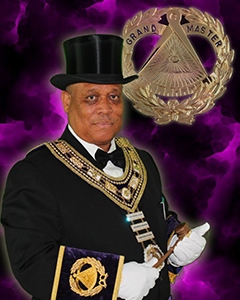 Jeffery Gerard Jones a resident of West Palm Beach, Florida was born in 1963 in Lake Worth, Florida to the late Jerome Jake Jones and Mildred Knight-Jones. His mother (a retired educator) still resides in nearby Royal Palm Beach, FL. He is married to Yolanda Jones. They have 3 daughters (Chena, Erika, & Lakisha), 1 son (Jimmie) and 8 grandchildren (Cedrick, Darren Jr., Joshua, Jake, Niyema, Korrin, Jimmie III, and Kayla). Brother Jones accepted the Lord as his personal savior at an early age and was baptized in the presence of God by Rev. Isaiah S. Clark at Union Missionary Baptist Church in West Palm Beach. Brother Jones was educated in the Palm Beach County school systems receiving his high school diploma in 1981 from North Shore Senior High School. Brother Jones furthered his education enrolling at Florida A & M University in Tallahassee, Florida. While Attending Florida A & M University, Brother Jones was a member of the world renowned "Marching 100” Band.

In April of 1985, Brother Jones was raised from a dead level to a living perpendicular to stand on the square in Thomas City Lodge #226 in Wacissa, Florida by Worshipful Master Willie King. In the summer of 1986, Brother Jones Graduated from Florida A & M University’s College of Engineering Science and Technology with a B.S. in Technology Degree. Upon his graduation Brother Jones returned to his hometown to begin his career in Information Management. He has been employed by Florida Power & Light for 33+ years. He is currently Principal IT Project Manager; with responsibility for managing the integration and deployment of new Network Infrastructures for all FPL new construction projects within the entire Florida service territory.

In 1988, Brother Jones moved his Masonic membership from Thomas City Lodge #226 in Wacissa to the Pride of Palm Beach Lodge #447 in West Palm Beach. Brother Jones quickly went to work after being appointed to the Junior Deacon position by Worshipful Master Alfred J. Jones. Brother Jones held all positions in the lodge eventually being elected to Worshipful Master in 1995. He passed the gavel on in 1997 leaving the new Worshipful Master & the Lodge in excellent financial shape. In 1999 Brother Jones was recommended and did receive his honorary 33° degree in Little Rock, Arkansas and was a member of the of S. J. Bennett class of 1999. The degree was conferred upon him by SGIG Edgar Bridges, Sovereign Grand Commander of the Southern Jurisdiction. Brother Jones has affiliations with or served as the leader of several other Masonic houses and community-based organizations including: A.T. Stafford #10 RAM, Walter Johnson Jr Council #13 RAS Masters, Ft. Pierce Commandery #69, Knight Templar Masons, Sam Brady Consistory #312, Masud Temple #69, and Valentine Chapter #12 OES. Brothers Jones is also affiliated with the Grand Court and Grand Council of the Heroines of Jericho and Ladies of the Circle of Perfection, respectively. He is a member of the West Palm Beach Chapter of the NAACP, The FPLPAC (Florida Power & Light Political Action Committee), United Way Fair Share Contributors, and Lambda Alpha Alpha Chapter, of Omega Psi Phi Fraternity Inc. Over his Masonic career, Brother Jones has held various positions and has chaired various committees, including but not limited to: Worshipful Master, Most Excellent Hight Priest, Thrice Ill. Master, Eminent Commander, Illustrious Potentate, Grand Master of Ceremonies, Florida Council of Deliberation, Desert of Florida Chief Rabban, Imperial Deputy of the Oasis of West Palm Beach, Imperial Organizer, Desert of Florida, General Chairman Gala Day 2008, Assistant District Deputy Grand Master District #31, Grand Trustee-MWUGL of Florida.

In 2009, Brother Jones was nominated, elected, and duly installed as the Right Worshipful Junior Grand Warden of this great Masonic Jurisdiction, in 2010 he was elected to the office of Right Worshipful Senior Grand Warden, and again in 2015 he was duly elected and installed as the Right Worshipful Deputy Grand Master. In 2018 Brother Jones was Consecrated a SGIG Active Emeritus member of the United Supreme Council and 2020 he become a member of the Knight York Cross of Honor having served as the leader of all York Rite Masonic Bodies.

In the year 2020; Having been tried and found worthy through his service to the Jurisdiction of Florida, Brother Jones was elected and duly installed as the 19th Most Worshipful Grand Master of the Most Worshipful Union Grand Lodge of Florida. It was done so in the presence of God and a lawful number of Master Masons duly assembled at the Jurisdiction’s 150th Grand Communication. Brother Jones is a dedicated mason who has Prince Hall Masonry deeply rooted within his heart and through the grace of God he will continue to serve the Jurisdiction of Florida for many years to come.