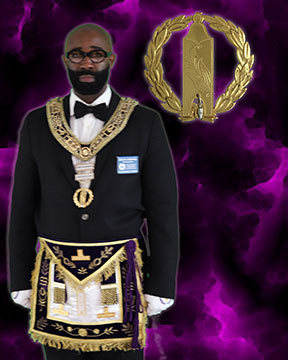 Marlon Shunn Honeywell, a resident of Crawfordville, Florida, was born and raised in the small town of Madison, Florida to the late Mr. Napoleon Honeywell, a Prince Hall Mason, farmer, and bus driver, and Mrs. Catherine James Honeywell, a member of the Order of the Eastern Star (Prince Hall), and a retired educator and administrator. Honeywell’s mother still resides in his hometown.

Brother Honeywell was educated in the Madison County school system and graduated during the Spring of 1990. After high school, he enrolled in the renowned College of Pharmacy and Pharmaceutical Sciences at Florida A&M University, graduating with a bachelors and doctorate degree in 1995 and 1997, respectively. Honeywell subsequently completed a one-year post-doctorate residency in home healthcare (1998) and a clinical fellowship (1999). He currently serves as the Executive Associate Dean of the College of Pharmacy, Pharmaceutical Sciences, and the Institute of Public Health at his beloved alma mater.

After observing his family’s consistent love for and participation in Masonic events, Brother Honeywell was initiated by Worshipful Master Jimmy Bryant (deceased) into Francis R. Gary Lodge #433, Free and Accepted Masons, International Masonry, in 1992. However, in 2009, he was healed into J.R.E. Lee, Sr. Lodge #422 in Tallahassee by the 15th Most Worshipful Grand Master of the Most Worshipful Union Grand Lodge of Florida, the Honorable Dr. Michael R. Moore. Once healed, he served in several lodge positions, including junior warden, senior deacon and senior and junior steward. As a result of consistent dedication and service, in December 2016, Brother Honeywell was installed as the 11th Worshipful Master of J.R.E. Lee, Sr. Lodge #422. He passed the gavel in 2018, leaving the lodge with a highly active membership, an exceptional relationship with other lodges in Tallahassee and True Destiny Chapter #84, and in excellent financial condition.

Brother Honeywell is an active fellow of the Phylaxis Society, an honor only bestowed concurrently upon 15 Masons, as dictated by the organization’s constitution. As an active fellow and the director of the Lux e Tenebris Research Chapter of the Phylaxis Society, he published several Masonic articles (esoteric), and served as editor-in-chief of and a contributor to four Masonic books entitled, The Lux e Tenebris Transactions.

In August 2020, by the blessings of God and the vote of the Grand Lodge, Brother Honeywell was elected and installed as the Right Worshipful Junior Grand Warden of the Most Worshipful Union Grand Lodge of Florida. In this newly elected position, Honeywell will continue his personal motto of “service before self” to assist the 19th M.W. Grand Master, the Honorable Jeffery G. Jones, to achieve the objectives of his tenure, serve humbly the brothers and sisters in the State of Florida, and learn the intricacies of being a line officer from the Grand Master, Past Grand Masters and the senior elected line officers.

May God continue to bless the Most Worshipful Union Grand Lodge and Its concordant and appendant bodies is his prayer.